DeQing's school, or why I'm glad I went into medicine... 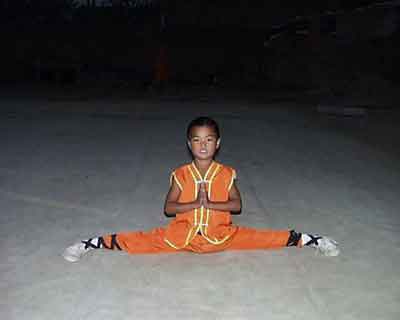 Well, here are some shots of my "stand in" master,  De Qing's private school. He teaches for the Temple, but at night, he goes to nearby Deng Fen to oversee the instruction of children in his own private school. Over here, school is not very common in the rural areas. A small amount of children get the opportunity to go to school. Some end up in gong fu schools, most of which are run by monks that have left the Shaolin Temple. Some schools are taught by non-monks. The typical school has anywhere from twenty to thousands of children. Wake up is typically at 0530, at which time running, into the mountains, or down the street, is done. After that, breakfast, usually a rice water mix and some fried bread things, is eaten. Training for about two hours in the morning, followed by two to three hours in the afternoon, and sometimes another two hours at night in the summer, with Chinese language, and occasionally English language classroom training interspersed in there. Dinner is usually comprised of rice and or noodle something or other, as is lunch. Wash up occurs at night, and everyone is in bed by 9 PM. It is not uncommon to fit ten to twenty students in bunk beds, all put together, in a small single room, with one bare light bulb hanging from the ceiling. Bathroom facilities generally consist of a pit over which concrete slabs, with spaces between, are laid. It is not an easy life by any means. The martial arts skills of these children however, is simply amazing. The nutritional status is another issue.

Where was I? The evening was spent at DeQing’s private school in Deng Fen. I was there also to get information for the same "project", part of which was an inquiry into gong fu training in China. De Qing opened his own school in December of 1997, and it has steadily grown in numbers to 45 students over the year. They range in age from a young, and very adorable 9, to the early twenties. Most kids are here because they want to learn gong fu, some are here because their parents sent them here. Imagine that, being 9 years old, and knowing what you want to do with your life. I’m 41, and I still don’t have the slightest idea what I’m going to do with my life. Their parents pay 6000 Yuan a year, this includes all food, clothing, supplies, lodging, and training. Pay 6000 Yuan, drop the kids off, and don’t see them for a year. Yes, that is basically what happens. Some parents visit every two months or so, some don’t visit for over a year. These kids are basically from well to do families (don’t ask me what "well to do" means in China. Maybe, we didn’t have to eat our dog last year….). 6000 Yuan is actually a lot of money, as white cloud only makes 5000 Yuan a year as a teacher, and the monks make around 500 Yuan a month being monks. Or was that a year? I can’t remember. If I remember, I’ll ask again.

Their typical day is a little different from Shaolin. They wake up at 0520, and are expected to be up and ready to run by 0530. They run three to four kilometers in Deng Fen regardless of the weather, and are back by 0640. Breakfast, the usual steamed bun thingies, watery rice soup, and the like (no Egg McMuffins here), is at 0700. The morning workout starts at 0800; it includes the usual, some running to warm up, stretching, kicking, jumping, basic gong fu, and forms. There is a ten minute break, and class ends at 1100. Class is run somewhat in the format of "me drill instructor, you piece of shit", with coaches barking out orders to these poor kids, and the kids instantly and attentively responding. It’s just like the military, though, I haven’t been in the military, from what I’ve seen in the movies, this is it.

Lunch is at 1120, and the students are expected to finish by 1140. There is a rest period from 1140 to 1440, during which the kids can sleep, practice gong fu, or just hang out. At 1440, they start assembling for workout which starts promptly at 1500. The usual routine is again gone through, with the usual ten minute break, and it ends at 1740. They have twenty minutes to clean up and get their bowls and chopsticks, and at 1800 they line up at the kitchen in a very orderly fashion to have the slop handed out. Dinner tonight was rice with some sort of fried vegetable mess, and they are allowed to eat all that they want. I opted out of dinner, deciding instead to go back to my room and have one of those delicious fake chocolate protein drinks mixed with water most likely bottled out of the river. Dinner ends promptly at 1830, which is followed by a short rest period. At 1900, training starts again, but this time only for an hour. At 2000 they have to wash, and at 2030 all are in bed with the lights out. Washing is an experience, as is the toilet. First, washing. There is a bowl, actually, each student gets one. A round plastic thing that you fill with cold water from the tap, that you wash with. Sometimes, the kitchen will warm some water up, so that the kids can wash with warm water. If you want a shower, you take the bowl of water and dump it over your head. I found the whole thing interesting, as for some reason, I smelled and the kids didn’t. I guess I have to find one of those bowls. 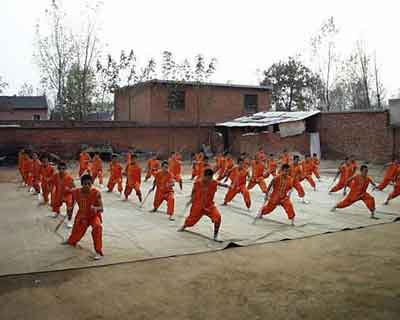 As for the toilet, there isn’t a bowl. (Oh, by the way, that's the toilet in the far back corner). The Chinese build everything out of brick, and these concrete slabs. The concrete slabs are preformed, in different lengths, all about a foot and a half wide, with tubular holes inside them to cut down on the weight. They use these for flooring, steps, roofs, everything where you need some sort of platform. Two by fours and plywood don’t exist. It’s just brick, concrete slabs, and cement to stucco smooth. When they need to board something up, whether it be a window or a hole in a wall, they just stack bricks. Well, anyway, the toilet is basically a large pit over which lie these concrete slabs, oriented in such a way that two lie parallel and separated, and one lies across, as in a large T. You squat on top of the cross one, with the ultimate hope if hitting the spot between the two parallel ones, and with the very ultimate hope that you don’t lose your balance. The students liked everything about the school, but they weren’t too happy about the bathroom. I made sure I didn’t have to go before I went to DeQing’s school; I saw it last trip.

Now there’s more to life than gong fu, and in DeQing’s school, they just got a teacher. The teacher teaches during training sessions, but the students alternate. The young kids might go one morning and the next day afternoon, rotating in that fashion, and learning Chinese and mathematics, while the older kids might go in the afternoon that day and the morning next, while learning English. While one section is in the school at class, the other section is out in the yard practicing gong fu. There doesn’t seem to be any reason in these gong fu schools to learn anything but Chinese, English, and mathematics.

They basically do this six days a week, with Monday off. Sunday afternoon is also off. The students spend their day and a half off doing what the head coach wants to do (the head coach, as are the two other instructors, DeQing’ old students). One weekend might be spent renting and watching videos on the one TV and VCR, or they might walk around DengFeng, play ball, sing, or they might hike up a nearby mountain. Regardless of what they do, they do it together. There is little sense of individualism. Sunday mornings are also very special, because the entire class does a ten to fifteen kilometer run that morning, at 0530, regardless of the weather. Monday, there is no running. It’s a day off. They get to do whatever they want, as long as the head coach wants to do it, and they all do it together.

From a big ugly (and bald) American’s point of view, it is really a shitty existence. I could never fathom American children doing this. Most plan on doing it for three to five years. One would think that there is a reason to put oneself through all of this, much like one puts oneself through a bunch of shit to become something, like a doctor. These kids are here to learn gong fu. Do they have any desires to become policeman, something a little goal oriented? Of the kids that I asked, one wanted to join the military later in life, two wanted to be coaches of gong fu, and all the rest just wanted to learn gong fu. Why? What is it about this that makes these kids travel a thousand kilometers (almost all of the students are from DeQing’s hometown)? It’s a cultural thing. All children grow up idolizing the Shaolin Temple monks. Only the best become the gong fu monks. There are no sports heroes here, no political figures to idolize, nothing but the sacred tradition of the Shaolin Temple. And the Shaolin Temple symbolizes gung fu. It’s almost like baseball and American kids, or basketball. We have our Michael Jordan's and the such, the kids here have their  DeQing (and me! "He big and strong, want to be like him" Not eating the shit you eat kid...). When a monk opens his own school, it is besieged by the children of his home town, as that monk, basically, has become that town’s hero. No wonder why DeQing, who wants to come to America, does not want to leave or lose his school. I can see the worship in the children’s eyes when he stands at the head of the class, almost like the worship in my dog’s eyes, when I dangle a milk bone in front of them.

They all want to be movie stars. But they are all realistic in knowing that they won’t be that. But interestingly enough, most of them have no goals, other than learning gong fu. It kind of matches the ideals that I have noticed in most people here. They really do not work on any sort of time schedule (DeQing’s school, with it’s punctuality, really struck me as abnormal here); people do what they need to do to survive, and they do it as they can. It is not exactly a stressful environment as the one that we create in the US. It appears to me that these people, with their relative lack of health care, their poor diets, and their unsanitary living conditions, for some reason appear healthier than their US counterparts. There is more of a "live for today" motive than "setting goals for tomorrow", a "I'll get it done when I get it done" attitude, an attitude which is best exemplified by it’s young.

And for today's lesson in heating rooms, did you know that a well placed laptop, positioned under the covers while playing a computer game, offers an incredible amount of warmth?